What to do when you’re angry with yourself

I was struggling with anger about a relationship recently and processed the emotion with a trusted adviser. She understandably asked me: “Have you forgiven this person?” The thing was, I had. I didn’t sense animosity toward the other person. I’d separated out of the hurtful situation and healthy boundaries were now in place.

As I thought more about her question and my lingering anger, I realized the person I was angry at was myself.

Dealing with anger at yourself is often the second half of the road to forgiveness. And, self-forgiveness is far more difficult for many of us.

Maybe you’ve worked hard to get out of a toxic situation, and you’ve even worked to cultivate an attitude of forgiveness toward the person who hurt you, now that you have healthy distance. But, you still notice that feeling of negativity surge inside of you whenever you think of this person or the circumstances.

That persisting anger is a good opportunity to reflect prayerfully for a moment. It’s possible that a part of you is still angry at YOU for what happened—even if most of you understands it wasn’t your fault.

You might feel as if you’ve betrayed yourself on some level—even if you couldn’t possibly have known better at the time. It’s amazing how we can hold younger versions of ourselves accountable for things we know now, when we have the benefit of hindsight.

Anger can be a cue that you need to pay attention to your boundaries. But, if you’ve done that work and the injury is long past, persistent anger can mean that the work of forgiveness isn’t complete. It might mean it’s time to start the work of forgiving the other person. Or, anger might be a sign that it’s time to start taking yourself off the hook.

If you’re angry with yourself, it might be time to start the process of forgiving yourself.

Here are some ways to start:

1.) Think back to the circumstances when you first got into that relationship or situation.

Were you lonely? Hurting? What was hard then that you didn’t know how to face? Often, we get sucked into toxic situations when we’re hurting or not sure how to care for ourselves. Can you extend compassion toward that younger version of yourself? She was in need and likely doing the best that she could.

2.) What qualities did the person who hurt you demonstrate at the time?

Maybe they were charismatic, confident, or charming. Maybe they made promises to rescue you from your pain. Most of us don’t learn how to detect narcissistic, manipulative or abusive traits early on. Typically, you don’t realize what’s happening until you’re well into the toxic relationship.

3.) When did you first begin to notice the signs? Who did you tell?

Abusive or toxic relationships tend to develop over time. You might have started to notice signs such as controlling behaviors, attempts to belittle you, or even physical aggression. Maybe you confided in someone, but they didn’t understand. Maybe you were encouraged to take a loving, supportive posture by a well-intended, albeit misguided, friend. And, the deeper into the relationship you get, the harder it is to get out. You feel guilty, isolated, and trapped by a sense of commitment to the person.

Could you forgive that younger version of yourself and take her off the hook? 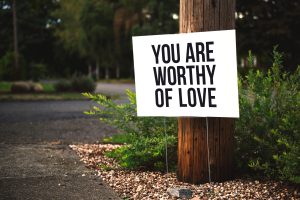 As you reflect back on those early days, do so through a lens of compassion. Consider that younger version of yourself as if she were a dear friend or even one of your own children. Would you come down on that person for missing warning signs she never knew existed? Or would you extend love and grace, saying, “I get it. That was a hard one. Let me lead you out and show you a better way.” You can’t hold yourself accountable for information you simply did not have.

It’s tempting to hold on to anger at yourself. It’s a way of beating ourselves into never getting it wrong again. But it doesn’t have to be that extreme. Listen to your anger, and let it lead you into greater wisdom. Then remind your anger that you’ve changed. You’ve learned a whole new set of information to help guide you. As you build trust with yourself, your anger can relax a little. It will be there to warn you should you start to head down an unsafe path.

Then, start the process of forgiving yourself. As you forgive yourself, you don’t get weaker, you get stronger. You’ve learned from your mistakes and you’ve set new boundary lines to ensure you won’t go down that road again. It’s time to breathe in that fresh new air just a little.

My dear children, let’s not just talk about love; let’s practice real love. This is the only way we’ll know we’re living truly, living in God’s reality. It’s also the way to shut down debilitating self-criticism, even when there is something to it. For God is greater than our worried hearts and knows more about us than we do ourselves.